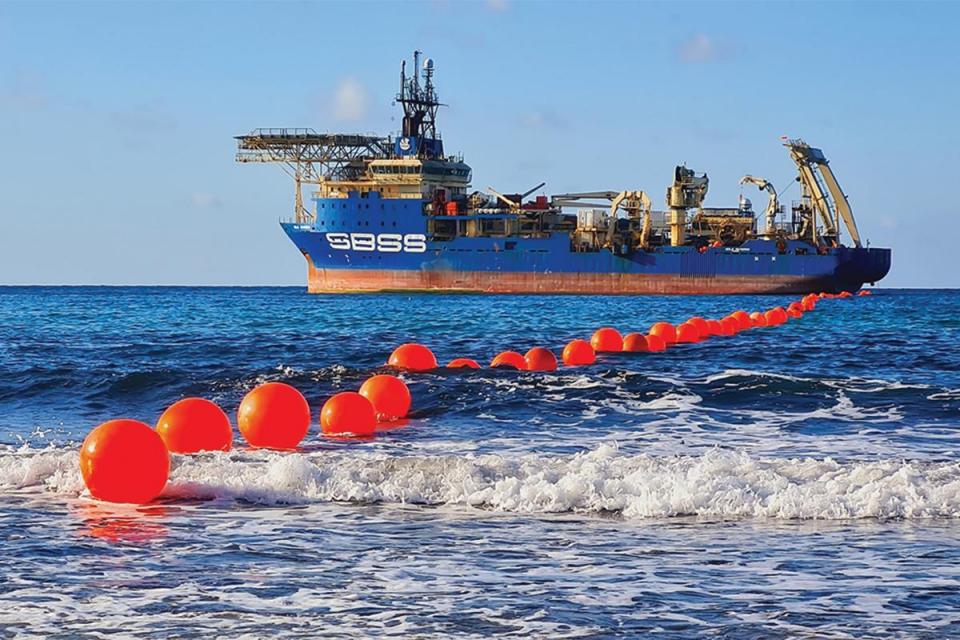 Our geographic location, in the heart of the Mediterranean means that as a small island state, our economic competitiveness and progress is totally reliant on international connectivity. A whole spectrum of industries, from the smallest to the largest company, depend on the capability of the country to provide reliability and resiliency in terms of connectivity to the internet and to the rest of the world. At GO, we are privileged to have such responsibility, one we take incredibly seriously.

Over the past few weeks, we have highlighted the importance of high-speed broadband and how this is radically transforming the way we work and interact as individuals and businesses. It is one thing having a nation that is intrinsically connected, where its people can actively participate in an increasingly digital society, where its infrastructure is linked and digitally driven. But human and societal progress needs more. It needs access to the rest of the world, to capitalise on globalisation and the benefits that this brings with it.

International connectivity and access to global internet is critical for customers and businesses alike. In our last article, we gave an insight into what lies behind this connectivity, what factors may impact our internet experience and why, and what solutions are available to ensure that no one is left behind in a world dominated by digital technologies. Essentially, we focused on our local, internet connections. In this article I would like to look outward and focus on how Malta is digitally connected to the rest of the world, why this is important for a country, and how GO has historically been a game changer in Malta’s international connectivity sphere.

Let’s start off by understanding why international connectivity is important.

Malta’s economy, and people’s lives and livelihoods depend on connectivity, and unlike other resources, connectivity cannot be produced or stored. Any emerging businesses or foreign direct investment will look at the country’s international connectivity capabilities as a first consideration.

Private data connections that securely connect two or more locations for private data services are also carried on such international assets. A solid submarine infrastructure which is critical to address the insularity of an island, also allows us to provide several critical telecommunication services such as voice calling capabilities, robust roaming services, DDoS mitigation and resilient access to cloud computing. The opportunities are endless.

Until recently, all international submarine cables, were laid in one maritime channel between Malta to Sicily. Further connectivity is then required on land to connect to data hubs further North in Italy.

Of course, having multiple connections such as these provides a certain level of comfort that connectivity is safe and protected, however one needs to consider the risks of depending on one jurisdiction. Natural disasters, maritime incidents, inclement weather are not foreign to mankind. Neither is the impact that such matters bring with them, one of which is major disruption to our connectivity.

Any major incident happening on this route would mean that Malta is digitally stranded – completed cut off from the rest of the world. This reality carries with it serious economic risks that needed to be addressed and this is where GO, as Malta’s leading telecommunications provider and a prime investor in Malta’s economic journey, stepped in.

Our mission as a company has always been to continuously invest in improving Malta’s connectivity to the rest of the world and mitigating such disruption. Our purpose is to drive a digital Malta where no one is left behind, so ultimately our success is intrinsically linked to the prosperity of Malta and its people. Continuous investment in existing infrastructure, as well as in new connectivity is critical to ensure sufficient redundancy to mitigate potential risks. In fact, last year GO announced a further investment of €25 million in its third submarine cable which has been named ‘La Valette’.

This cable forms part of the global PEACE System (Pakistan, East Africa Connecting Europe) project – a multi-million-euro project which consists of 15,000km of submarine cable emulating the old oriental silk route, connecting countries across the globe on its way from Asia to Europe.

The massive submarine system provides open, flexible and carrier neutral services for its participating members who enjoy access to a network with highly reduced latency and enhanced connectivity between continents.

The 55km branch towards Maltese shores, which is exclusively owned by GO, will directly connect Malta to the 3,214-km stretch in the Mediterranean between Marseille and Egypt making GO the first Maltese operator to have additional redundancy on international connectivity other than to Italy. Furthermore, landing on the West Coast of the island, this cable also makes GO the first and only operator to have access to international connectivity from a shore other than that from where the rest of the other international submarine cable systems land. Consequently, resiliency has reached unprecedented levels.

This project will enable the country to capitalize on GO’s technology and international infrastructure to ensure that the population has among the fastest connections in Europe, with an international submarine system that uniquely lands directly in a global data centre such as Marseille. Businesses will therefore be able to take advantage of emerging eCommerce opportunities and enjoy secure low-latency access to over 160 connectivity providers along with multiple content, cloud, gaming, and video streaming platforms.

One can only imagine the complexities involved in a project of this magnitude and the level of detailed planning, coordination and precise execution that is required to lay 15,000km of cabling from Asia, through Egypt, to Malta and to mainland France, not to mention braving the elements en route. Here is a quick look at the key milestones.

On August 4, 2021, cable laying started in the Abu Talat (Egypt) area towards the Branching Unit of Cyprus. From August 25-31, the segment to Cyprus was laid with post lay operations taking until September 13 to be completed. The segment towards the Malta branch unit was then laid with the full operation being completed on October 17.

The cable laying towards Golden Bay was the final phase of the operation and this was completed in December 2021. Upon completion of the beach operations, the cable had to be connected to the land equipment and undergo days of quality testing. The cable will also be protected on shore and in the sea and has been secured to the seabed to avoid damage. Following end to end testing, the infrastructure was declared ready for service in late March 2022.

With a new infrastructure connecting Malta to a new location in Europe and Africa, Malta’s new international connectivity map is forever transformed. It remains a one-of-a-kind project, that reconfirms GO’s purpose to drive a Digital Malta where no one is left behind.

GO has always been on the right side of history when it comes to investing in Malta’s connectivity to the rest of the world. We have been well ahead on the leader board when it comes to investment. We have invested in infrastructure, in technology, in our people, and in products and services that are enjoyed by the many. We have been connecting people and businesses for the past 45 years. Over the last five years alone we have invested over €100 million in digital infrastructure to bring our purpose to life. We plan to invest another €100 million in the next five years to ensure that Malta’s digital needs of tomorrow, are catered for today, and in doing so, we are making peoples and businesses lives, better every day.